NYC sunset, Before and After - beboyphotographies

How did I make this shot ?

EN : Many people often ask me how to capture great cityscape photos. It's usually quite easy to get great photos, especially when you shoot in a so photogenic city like NY, everywhere in the city can be found great opportunities for great photos ! To maximise your chances, go taking photos during sunset (and/or sunrise) or during the blue hour and your chance to get a great shot is quite high. But to go one step further, being able to get the "wow" effect when someone will show your photo, a path you should explore is to blend the best of 2 worlds, the sunset AND the blue hour on the same shot. This is what is called "time blending" and the shot below is the result of the blending of a sunset shot and a shot at blue hour.

EN : To give you a better idea from where I started with this sunset photo, you'll find below some of the raw files I used. I mainly used 2 photos, one I took during sunset and another I took about 25 minutes later during twilight. For these 2 shots, I took 5 different exposures from light to dark to be sure to get all the files I would need during post-processing.

In the end, I used much less than the 5 bracketed photos I took. I used only 2 photos from the sunset shot : A main exposure, not too dark, not too bright, exposed as good as possible for both shadow and highlights. And I used one over-exposed photo to light up just a little bit the darkest areas under the bridge. I wanted to keep this part quite dark but not totally clipped, without any détails, as it was on the main sunset exposure. I blended all these shots together to get a perfectly exposed sunset shot. Then the final step of the blending process was to add the city lights. To achieve this, I imported the twilight shot on the top of my layers in Photoshop and I applied a mask to only keep the city lights. To make this much easier, I used my advanced blending techniques I explain in my cityscape video tutorial (actually, only in french but I plan to translate this video tutorial in English asap). You can check the Photoshop layers screenshot below to have an idea how looks my editing process. 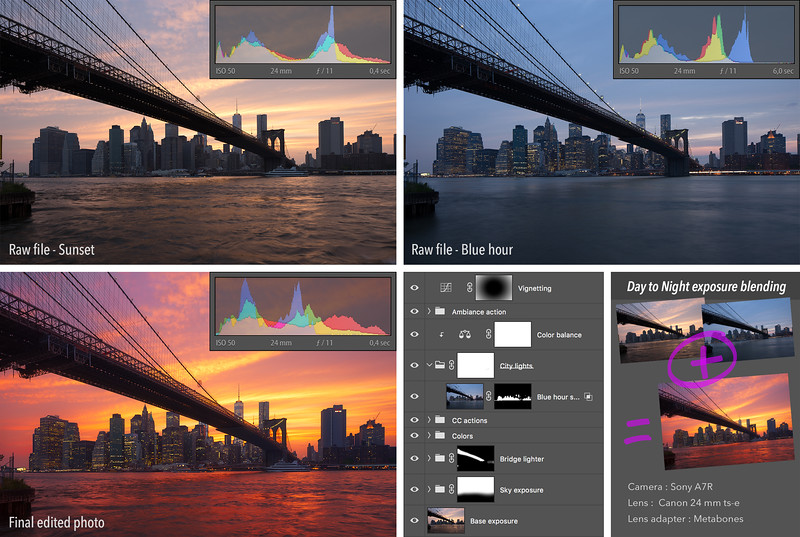 EN : About the equipment, I used a Sony A7R paired with a Tilt-Shift lens (the Canon 24 mm ts-e). I love this lens because I can always keep the vertical lines straight, in camera ! During the processing, I didn't had to correct the perspective and distortion at all. This tilt-shift lens is definitely a time saver !

EN : This location is quite famous in New-York, specially because it's very easy to reach. It's also a great place to be to enjoy the New-Yorker's life. Indeed, many people come here to relax in the park nearby, some of them play frisbee, others sing or dance, or they just enjoy the impressive view of the city skyline. There is no tripod policy at this place, that means you can use your tripod without any problem. Below is a map that shows exactly where I was standing with my camera. The purple lines show the angle of view covered at 24 mm. When you'll go NY, a wide angle lens is required if you wanna show how big this city is ! So that's why I would recommend bringing a lens like a 16-35 mm or a 14-24 mm for example.

EN : I make some video tutorials in which I explain in detail how I edit my photos. Actually all of them are in french only, sorry about that my English speaking followers but I plan to add English subtitles to my videos tutorials. You can learn more about this here : My video tutorials

EN : To keep informed of the last blog updates and site news, you can join the newsletter. You won't miss any news and updates from the blog with all its photography tips :)